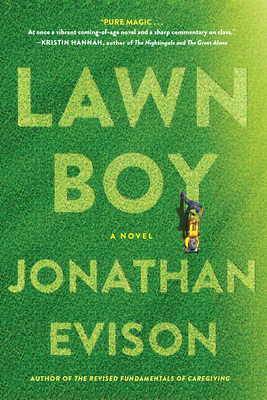 By Jonathan Evison
$26.95
Email or call for price

“Mike Munoz is a broke, unemployed, sexually confused 22-year-old Chicano man living in Washington State, just trying to find the right path to his American dream. One setback after another is laid in front of him, and Mike wonders if he will ever make the leap from survival mode to working toward his goals. I loved this book for the sincere, engaging way the author addresses the issues of class distinction and cultural discrimination, and Mike is such a funny, tenacious, lovable human that you can't help but ache for his disappointments and cheer for his victories. I hope everyone reads this inspiring novel.”
— Cassie Clemans, Roundabout Books, Bend, OR

Winner of the Alex Award

“Jonathan Evison's voice is pure magic. In Lawn Boy, at once a vibrant coming-of-age novel and a sharp social commentary on class, Evison offers a painfully honest portrait of one young man's struggle to overcome the hand he's been dealt in life and reach for his dreams. It's a journey you won't want to miss, with an ending you won't forget.”


—Kristin Hannah, author of The Nightingale

For Mike Muñoz, a young Chicano living in Washington State, life has been a whole lot of waiting for something to happen. Not too many years out of high school and still doing menial work—and just fired from his latest gig as a lawn boy on a landscaping crew—he knows that he’s got to be the one to shake things up if he’s ever going to change his life. But how?

In this funny, angry, touching, and ultimately deeply inspiring novel, bestselling author Jonathan Evison takes the reader into the heart and mind of a young man on a journey to discover himself, a search to find the secret to achieving the American dream of happiness and prosperity. That’s the birthright for all Americans, isn’t it? If so, then what is Mike Muñoz’s problem? Though he tries time and again to get his foot on the first rung of that ladder to success, he can’t seem to get a break. But then things start to change for Mike, and after a raucous, jarring, and challenging trip, he finds he can finally see the future and his place in it. And it’s looking really good.

Lawn Boy is an important, entertaining, and completely winning novel about social class distinctions, about overcoming cultural discrimination, and about standing up for oneself.

“Mike Muñoz is a Holden Caulfield for a new millennium.”
—The New York Times Book Review

“Jonathan Evison takes a battering ram to stereotypes about race and class in his fifth novel, Lawn Boy . . . full of humor and lots of hope . . .  Evison has written an effervescent novel of hope that can enlighten everyone.”
—Washington Post

“Moving . . . Evison convincingly evokes the small disasters and humiliations that beset America’s working poor. Mike’s gradual growth into self-awareness is punctuated by moments of human kindness and grace that transpire in and among broken-down trucks, trailer parks, and strip malls. Focusing on the workers who will only ever be welcome in gated communities as hired help, Evison’s quiet novel beautifully considers the deterioration of the American Dream.”
—Publishers Weekly, starred review

"In his bighearted portrayal of Mike Muñoz, Evison has created an indelible human spirit content to live authentically, which just might prove to be the true American dream."
—Booklist, starred review

“Evison brings genuine humor to Mike's trials and tribulations. The writing is razor-sharp, and Evison has an unerring eye for the small details that snap a scene or a character into focus. The first-person narration turns Mike into a living, breathing person, and the reader can't help but get pulled into his worldview.”
—Kirkus Reviews

“Jonathan Evison's voice is pure magic. He is a consummate world builder; in his unique universe, there is heartbreak and love and tragedy, and—always—laughter. In Lawn Boy, at once a vibrant coming of age novel and a sharp social commentary on class, Evison offers a painfully honest portrait of one young man's struggle to overcome the hand he's been dealt in life and reach for his dreams. It's a journey you won't want to miss, with an ending you won't forget.”
—Kristin Hannah, author of The Nightingale

“A triumph from the ground up . . . finally a book that zooms in on social strata without flinching or copping out. Lawn Boy takes us into the heart, mind and body of Mike Muñoz as he makes a coming of age trek from landscaping crew to navigating the dead American dream— all the way to reimagining a future on his own terms.”
—Lidia Yuknavitch, author of The Book of Joan

“Jonathan Evison can write about anything and make it sing with hard-bitten empathy. I love it that he writes about working men without condescension. I had jobs like this. And you can tell that he did, too. Tough and strangely sweet at the same time.”
—Luis Alberto Urrea, author of Queen of America

“In Evison's tough and wry novel, Mike Muñoz is every person who wants a living wage and a little dignity, ‘the opportunity to think beyond sustenance long enough to dream.’ Jonathan Evison has written a fierce and funny novel about a young man's attempts to transcend class and poverty.”
—Shelf Awareness

“It’s a difficult thing to write uproariously humorous fiction that has heart, passion, and inspiration rolled into it as well. The life of Mike Muñoz is a comedy of self-inflicted errors and familial obstruction, but his positive outlook toward achieving the American dream is infectious and inspiring and will make you laugh and cry, often on the same page, sometimes for the same reason.”
—The San Diego Union-Tribune

“A novel about a young man and the changing American dream.”
—New York Post

“Few authors handle their characters with the compassion that seems to come naturally to Jonathan Evison. The Seattle novelist’s latest work, Lawn Boy, explores the struggles of the modern American Dream through Mike Muñoz, a young Chicano landscaper in Washington state.”
—Seattle Weekly

“Evison’s enthusiasm for his protagonist and his book’s message is evident on every page. It’s the kind of book that elbows its way into your head and forces you to think about your world in a new way.”
—Seattle Review of Books

“The book explores the lives of people like Mike with humor and compassion, wrestling with how you get ahead when you can barely stop falling behind.”
—Salt Lake City Weekly

“A coming-of-age story wrapped in a conversational critique of class and capitalism, with equal doses of humor and heart planted here and there.”
—Bainbridge Island Review

“A swift, engaging read, with an alternately wry and wistful sense of humor. But it also addresses painful territory head-on, especially when it comes to American economic and cultural inequality.”
—Cascadia Magazine

“Moving, hilarious, and uplifting . . . The genius of the novel, and of its author, lies in the complexity of emotions Mike’s journey evokes, both from its hopeful beginning to its unexpected fulfillment. But it’s also in the nature of that fulfillment—in the subtle sleight of hand Evison works to show that the grass can be greener on either side of the fence.”
—Four Corners Free Press

“In this funny, angry, touching, and ultimately deeply inspiring novel, the bestselling author takes the reader into the heart and mind of a young Chicano living in Washington State on a journey to discover himself, a search to find the secret to achieving the American dream of happiness and prosperity.”
—Edmonds News (Edmonds, WA)

“An entertaining read, with a few surprises up its sleeve.”
—BookReporter

“Lawn Boy is an important, entertaining, and completely winning novel about social class distinctions, about overcoming cultural discrimination, and about standing up for oneself.”
—BookBrowse