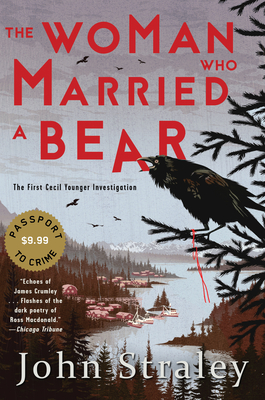 This is book number 1 in the A Cecil Younger Investigation series.

High drama meets local color as a private investigator works to uncover the motive and identity of a killer in this Shamus Award–winning first Cecil Young investigation set in Sitka, Alaska.

Cecil Younger, local Alaskan investigator, is neither good at his job nor at staying sober. When an old Tlingit woman hires him to discover why her son, a big game guide, was murdered, he takes the case without much conviction that he’ll discover anything the police missed. He really just needs the extra cash. But after someone tries to kill him, Younger finds himself traveling across Alaska to ferret out the truth in the midst of conspiracies, politics, and Tlingit mythology. High drama meets local color as Cecil Younger works to uncover the motive and identity of the killer.

John Straley was born in Redwood City, California, in 1953. He received a BA in English from the University of Washington. When his wife, Jan, a prominent whale biologist, announced she was taking a job in Sitka, the two headed north and never left. John worked for thirty years as a criminal defense investigator, and many of the characters that fill his books were inspired by his work. Now retired, he writes in his weather-tight office overlooking Old Sitka Rocks. The former Writer Laureate of Alaska, he is the author of ten novels.

Praise for The Woman Who Married a Bear

Winner of the Shamus Award for Best First Novel

“Blazes a new trail through the dense, familiar forest of the mystery genre . . . A highly refreshing setting, a great cast of characters, and an intriguing plot . . . A winning combination.”
—The Bloomsbury Review

“Outstanding . . . Satisfies on all levels.”
—The Kansas City Star

“As great writers have always done, Straley breathes new life into a stock character by remaking an ancient myth.”
—The Vancouver Sun

“Clear and crisp, like a Juneau morning.”
—Albuquerque Journal

"A darkly poetic thriller with a strange sense of place, and exotic debut which augurs well for the author."
—Time Out

"The Woman Who Married a Bear weaves Alaska's two wildest sides together—the dark secret world of city nights, with its streets and bars, and the sprawling world of the bush country and mountain forests where bears and ravens preside. [Straley] lets you breathe the chill wetness of the country and he gives you the people of these outpost communities exactly as they are."
—Richard Nelson, author of The Island Within

"Strong and sobering . . . with his storyteller's sense of dramatic action [Straley's] in his glory."
—The New York Times Book Review

“Lesser writers look to their characters’ poor choices and attempts to rectify them, John Straley loves his characters for just those choices.  Hölderlin wrote: 'Poetically man dwells on the earth.' Some of us wind up in limericks, some in heroic couplets. But damned near every one of us, sooner or later, ends up in one of Straley’s wise, wayward, wonderfully unhinged novels.”
—James Sallis, author of Drive and the Lew Griffin mysteries

"Chandler, Ross Macdonald, James Crumley . . . Straley proves once again that he is up there with the great ones . . . His prose is as smooth as a well-tuned cello. He has tremendous feeling for the setting: not only the open waters and frosted countryside outside of Sitka and Juneau, but also the somewhat seedy streets of these cities."
—Chicago Tribune

"Outstanding . . . satisfies on all levels."
—The Kansas City Star