The Curious Eat Themselves: A Novel (A Cecil Younger Investigation #2) (Paperback) 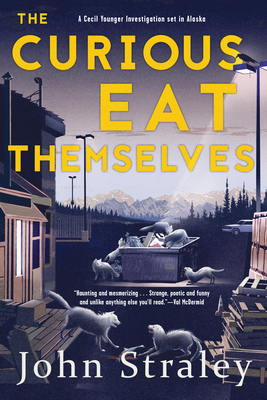 This is book number 2 in the A Cecil Younger Investigation series.

Welcome to Sitka, Alaska, a land of breathtaking vistas and beautiful fauna, where locals are trying their best to be good—and to survive—in what may be the last vestige of the Wild West.

When local woman Louise Root asks private detective Cecil Younger to investigate her rape at the Otter Creek gold mine, he agrees. After all, Louise is a close friend of his ex. Maybe helping her out could improve Hannah’s opinion of him. But before Cecil can make progress on the case, he witnesses Alaska state troopers fishing her body out of the ocean—not exactly the resolution he had in mind.

Despite the unfortunate end his last client met, Cecil finds himself inundated with requests from all sides: his old friend, Officer Doggy, wants help controlling the grieving Hannah; Cecil’s autistic roommate, Todd needs help finding his Labrador retriever; and the sleazy executives of Global Mining want dirt on a local environmental activist—a request even the bungling PI finds suspicious. But Cecil also feels a responsibility to discover the truth behind Louise’s death. If Louise knew a secret that got her killed, Cecil needs to discover and expose the truth before he, too, is permanently silenced.

Praise for The Curious Eat Themselves
“Strong and sobering . . . with his storyteller’s sense of dramatic action [Straley’s] in his glory.”
—The New York Times Book Review

"Haunting and mesmerising . . . strange, poetic and funny and unlike anything else you'll read this year."
—Val McDermid, Manchester Evening News

“One of the strongest series since Hillerman set up shop.”
—Kirkus Reviews

"With the second adventure of Cecil Younger, a PI in southeastern Alaska, Straley reconfirms his claim to the regional territory he staked out in The Woman Who Married a Bear . . . Straley's atmospheric prose takes hold and the action hums along, through unethical dealings and more killings, to the rugged, backwoods Alaska finale."
—Publishers Weekly

Praise for John Straley
“Lesser writers look to their characters’ poor choices and attempts to rectify them, John Straley loves his characters for just those choices. Hölderlin wrote: 'Poetically man dwells on the earth.' Some of us wind up in limericks, some in heroic couplets. But damned near every one of us, sooner or later, ends up in one of Straley’s wise, wayward, wonderfully unhinged novels.”
—James Sallis, author of Drive and the Lew Griffin mysteries

"Chandler, Ross Macdonald, James Crumley . . . Straley proves once again that he is up there with the great ones . . . His prose is as smooth as a well-tuned cello. He has tremendous feeling for the setting: not only the open waters and frosted countryside outside of Sitka and Juneau, but also the somewhat seedy streets of these cities."
—Chicago Tribune

"Outstanding . . . satisfies on all levels."
—The Kansas City Star