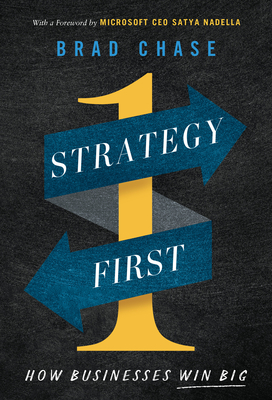 In Strategy First, Brad Chase, the mind behind some of Microsoft's largest and most successful initiatives, explains why building robust strategies is the imperative to business success. Chase leads readers through his easy-to-use strategy model, Strategy = E x mc2, which teaches readers the art of strategy--how to build and execute winning strategies relative to the competition. To supplement the model, Chase provides 5 key tips to strategy prosperity and over 50 examples from a broad range of businesses that help the reader think about how they can use his Strategy First toolkit. The author will inspire readers to examine the effectiveness of their current strategies, using the model that has served him in his distinguished career.

Chase began his Microsoft tenure in 1987, where his award-winning marketing campaign promoting Windows 95 broke numerous records and his efforts as MSN.com's leader prompted a turnaround of the site's success. Chase ended his tenure at Microsoft in 2002 and since then has served as an advisor and/or board member to many companies, such as GE, Brooks, Expedia, and the Boys and Girls Clubs. Chase has also shared his Strategy First approach across the nation through speeches to executives at large and small businesses, incubators, and students at topflight MBA programs and at conferences.

Brad Chase has had a broad and extensive business career. He has advised leaders of businesses of many different sizes, from startups to Fortune 500 firms, and in many different kinds of markets, from mobile and education to enterprises and consumer services. Some of the companies he has worked with include GE, Telstra, VMware, Mozy (a subsidiary of EMC), Blucora, Sonos, Vizrea, and Crisply. He has also held leadership positions on the boards of many companies and nonprofit organizations, including Expedia, Ooyala, DreamBox, Brooks, Boys and Girls Clubs of King County, and The Nature Conservancy. As a public speaker, Brad has spoken about his particular theory on business strategy, Strategy First, to executives at large and small businesses, to incubators, at conferences, and to students at topflight MBA programs. His first book, Strategy First, will launch June 16th, 2020. Before consulting, board work, and speaking, Brad spent 14 years at Microsoft finishing his tenure as a Senior Vice President and Executive Officer managing a team of over 4,000. From April 1999 until mid-2002, Brad led MSN.com's transformation from an unsuccessful internet service to the worldwide traffic and search leader. Under his leadership at MSN, search traffic, revenue, and internal team morale all more than doubled.Prior to MSN, Brad led marketing for the client and server business for Windows 2000, Windows 98, and Internet Explorer (IE) versions one through five. Brad's marketing team introduced a new, more profitable product strategy for the server and client businesses, successfully launched Windows 98 and Windows 2000, and helped IE become the market leader. Brad also developed and led the marketing strategy, execution, and worldwide, record-breaking launch of Windows 95, which is often considered the event and product that ushered computers and software into the mainstream. Brad and his team won numerous awards for the Windows 95 marketing effort. Brad also oversaw the launches for both MS-DOS 5 and MS-DOS 6 and was the first marketing leader for Microsoft Office.In addition to his nonprofit board work and personal giving, Brad has donated tens of thousands of dollars to charitable causes through his side company Entspire, maker of the fun and fascinating origins game, Orijinz, .Prior to joining Microsoft in 1987, Brad worked as a sales representative for Boise Cascade's office products division. He holds an MBA from Northwestern's Kellogg School of Management and a BS degree from the University of California at Berkeley.More about Brad can be found on his website: bradchase.net.