God of Mercy: A Novel (Hardcover) 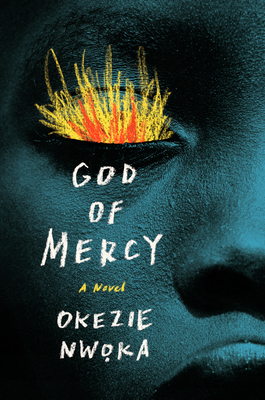 “Nwoka’s debut feels like a dream, or a fable, or something in between . . . Recommended for fans of Nnedi Okorafor’s Remote Control or Nghi Vo’s The Empress of Salt and Fortune.” —Ashley Rayner, Booklist

"[God of Mercy] owes a debt to Chinua Achebe’s Things Fall Apart, revising that novel's message for the recent past . . . A well-turned dramatization of spiritual and social culture clashes." —Kirkus Reviews

God of Mercy is set in Ichulu, an Igbo village where the people’s worship of their gods is absolute. Their adherence to tradition has allowed them to evade the influences of colonialism and globalization. But the village is reckoning with changes, including a war between gods signaled by Ijeoma, a girl who can fly.

As tensions grow between Ichulu and its neighboring colonized villages, Ijeoma is forced into exile. Reckoning with her powers and exposed to the world beyond Ichulu, she is imprisoned by a Christian church under the accusation of being a witch. Suffering through isolation, she comes to understand the truth of merciful love.

Reimagining the nature of tradition and cultural heritage and establishing a folklore of the uncolonized, God of Mercy is a novel about wrestling with gods, confronting demons, and understanding one's true purpose.

Okezie Nwọka (he/they) was born and raised in Washington, D.C. They are a graduate of Brown University, and attended the Iowa Writers' Workshop as a Dean Graduate Research Fellow. They teach and live in their hometown.

"While this tremendous work is most readily described as magical realism or as a work of fable, God of Mercy is too powerful to stay within the confines of a single genre . . . Written in verse that recalls the rhythm of fables, Nwoka eloquently details the perseverance and thriving of a young woman descended from a people who have resisted colonization at every turning point in history."
—Maya C. James, Locus

"Nwoka’s debut feels like a dream, or a fable, or something in between . . . The vestiges of colonialism run deep throughout this novel, as well as themes of forgiveness and compassionate love . .  Recommended for fans of Nnedi Okorafor’s Remote Control or Nghi Vo’s The Empress of Salt and Fortune."
—Ashley Rayner, Booklist

"In Okezie Nwọka’s dazzling and disquieting novel God of Mercy, battles between gods reignite a war between religions . . . Rife with magical realism and full of promise . . . God of Mercy undertakes a scrupulous review of the destructive power of colonialism through an imprisoned, gifted girl."
—George Hajjar, Starred Review, Foreword Reviews

"[God of Mercy] owes a debt to Chinua Achebe's Things Fall Apart, revising that novel's message for the recent past . . . A pair of distinctive qualities [make] Nwọka worth continued attention. First is their command of different rhetorical modes . . . Second is an earned note of optimism . . . A well-turned dramatization of spiritual and social culture clashes."
—Kirkus Reviews

"Tradition and change clash to devastating effect in Okezie Nwoka's compelling and heartrending debut, God of Mercy . . . Nwoka writes with a sure rhythm all their own, slipping easily between structured passages and stream of consciousness inner monologues."
—Jaclyn Fulwood, blogger at Infinite Reads via Shelf Awareness

"What an incisive contemplation of being in the world. I read this book with awe and gratitude. It is a love letter to a world in which multiple ways of being may be celebrated. Through their meditation on igbo ontology and its colonial defilement, Nwọka invites us into an exquisite exploration of flight and abandonment, evoking stories that are as old as they are new, timeless as they are timely."
—Novuyo Tshuma, author of House of Stone

"God of Mercy is an elegantly written, morally rigorous exploration of tradition and belonging. Reminiscent of Toni Morrison's inventive language-making and Chinua Achebe's decolonizing legacy, Okezie Nwọka is a masterful storyteller, and a writer of unusual grace."
—Alexia Arthurs, author of How to Love a Jamaican

"God of Mercy is a profound exploration of religion, faith, and compassion from a gifted storyteller. Okezie Nwọka creates a richly imagined postcolonial landscape that is at once otherworldly, tragically human, and completely unforgettable."
—Maisy Card, author of These Ghosts are Family

"God of Mercy isn't just a heart-stopping debut—it's a complete decolonization of the novel, a resounding rejection of the white gaze, a chronicle of a history that has for too long gone untold. This book is at the forefront of a new generation of postcolonial novels, and Nwoka's talent is unmatched."
—R.A. Frumkin, author of The Confidence

“This beautiful book has magic in it, and grace, and power.”
—Kate Christensen, author of The Great Man