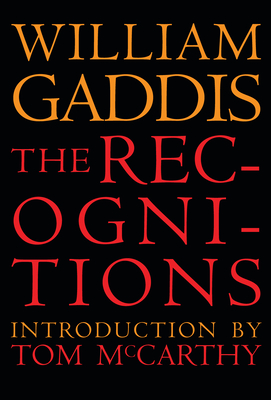 A postmodern masterpiece about fraud and forgery by one of the most distinctive, accomplished novelists of the last century.

The Recognitions is a sweeping depiction of a world in which everything that anyone recognizes as beautiful or true or good emerges as anything but: our world. The book is a masquerade, moving from New England to New York to Madrid, from the art world to the underworld, but it centers on the story of Wyatt Gwyon, the son of a New England minister, who forsakes religion to devote himself to painting, only to despair of his inspiration. In expiation, he will paint nothing but flawless copies of his revered old masters—copies, however, that find their way into the hands of a sinister financial wizard by the name of Recktall Brown, who of course sells them as the real thing.

Dismissed uncomprehendingly by reviewers on publication in 1955 and ignored by the literary world for decades after, The Recognitions is now established as one of the great American novels, immensely ambitious and entirely unique, a book of wild, Boschian inspiration and outrageous comedy that is also profoundly serious and sad.

A 1982 MacArthur Fellow and two-time winner of the National Book Award, William Gaddis (1922-1998) was the author of five novels: The Recognitions, J R, Carpenter's Gothic, A Frolic of His Own, and, published posthumously, Agapē Agape.

Tom McCarthy is the author of four novels—Remainder, Men in Space, C, and Satin Island—and several works of criticism, including Typewriters, Bombs, Jellyfish (2017), a collection of essays published by New York Review Books. In 2013 he was awarded the inaugural Windham-Campbell Prize for Fiction by Yale University. He lives in Berlin.

William H. Gass (1924-2017) was a novelist, short-story writer, essayist, critic, and professor of philosophy. NYRB Classics reissued his book-length essay On Being Blue: A Philosophical Inquiry and his short-story collection In the Heart of the Heart of the Country in 2014.

“Just as it’s possible to read The Recognitions narrowly as a satire of midcentury bohemia, J R operates on one level as a send-up of American capitalism. . . . But the book is more profoundly a portrait of a world that has given up on transcendent values. . . . The coherence of the vision, the order that Gaddis imposes on the chaos of his material through sheer force of artistic will, offers the closest thing to redemption this world allows, and gives the book, finally, a poignant hopefulness. . . . I count my second time through [The Recognitions and J R]—like my first—among the great literary experiences of my life.” —Christopher Beha, Harper’s Magazine

“The book’s themes and its fierce indictment of the modern world may seem conventional by now, but Gaddis’s treatment of them is so dazzlingly original that one never has the sense of mere recapitulation of received ideas. In all this, and in its scope, its witty-serious use of erudition, its endless exploitation of the resources available to a modern text, its brilliant use of language, and, not least, its marvelous humor and range of tone . . . The Recognitions seems to me one of the most important American novels written since the last war.” —Tony Tanner, The New York Times Book Review

“I remember the bookstore, long gone now, on Forty-Second Street. I stood in the narrow aisle reading the first paragraph of The Recognitions. It was a revelation, a piece of writing with the beauty and texture of a Shakespearean monologue—or, maybe more apt, a work of Renaissance art impossibly transformed from image to words. And they were the words of a contemporary American. This, to me, was the wonder of it.” —Don DeLillo

“Their surfaces will seem daunting but look beyond these novels’ haughty, hefty façades. Once you get to know them inside, they’re much more fun than they look. They will make you laugh out loud. They will absorb you. They will keep you coming back for more. . . . while Gaddis’ characters spend a lot of time saying nothing, they are always intriguingly human characters worth knowing over and over again. Which is what makes these perfect lockdown preoccupations. . . . Everything you need to know about life is bubbling away under the covers of these two world-size books.” —Scott Bradfield, Los Angeles Times

“Valued by many serious readers as the secret masterpiece of our time.” —Michael Dirda, The Washington Post

“The Recognitions is always spoken of as the most-overlooked important work of the last several literary generations . . . Through the famous obscurity of The Recognitions, Mr. Gaddis has become famous for not being famous enough.” —Cynthia Ozick

“The Recognitions is a warning above all else—a plea, like ‘The Waste Land,’ for Western society to recognize its mythic origins before art expires.” —John Lingan, The Quarterly Conversation

“He [Gaddis] is an heir to Eliot, whose quests, imposters and enervated landscapes haunt his novels, as well as the great Russians—Dostoevsky, Gogol, Tolstoy, Chekhov, Turgenev—with whom he shared the hope of civilizing a benighted nation.” —Dustin Illingworth, The Point