The Last of the Light: About Twilight (Paperback) 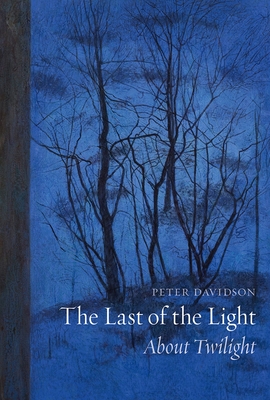 By Peter Davidson
$22.50
Email or call for price

Neither day nor night, twilight has long exerted a fascination for Western artists, thinkers, and writers, while haunting the Romantics and intriguing philosophers and scientists. In The Last of the Light, Peter Davidson takes readers through our culture’s long engagement with the concept of twilight—from the melancholy of smoky English autumn evenings to the midnight sun of northern European summers and beyond. Taking in poets and painters, Victorians and Romans, city and countryside, and deftly combining memoir, literature, philosophy, and art history, Davidson shows how the atmospheric shadows and the in-between nature of twilight has fired the imagination and generated works of incredible beauty, mystery, and romance. Ambitious and brilliantly executed, this is the perfect book for the bedside table, richly rewarding and endlessly thought-provoking.

Peter Davidson is fellow of Campion Hall at the University of Oxford. He is the author of a book of essays about northern culture, Distance and Memory, and a collection of verse, The Palace of Oblivion.

“The Last of the Light is both a celebration of and inquiry into the significance of temperature and skies, especially at this time of year, when we are in the twilight of the seasons. . . . Davidson takes us to places that are vast and lovely as well as somehow underlit and shadowy, where a kind of emptiness and uncertainty prevails. . . . He loves the lost, the fading, the ‘fugitive’ as Robert Macfarlane, in his Landmarks, quoted Davidson’s word back to him. Here exactly is the tone and spirit of this book, ideas illuminated on the pages—and in illustrations and color plates—which encourage our eyesight to become acute in the way it is at the end of the day, seeing everything so clearly before it falls back into shadow, for now ‘one last hour, one hour more.’”
— Kirsty Gunn

“Davidson’s intricate meditation on twilight in European art and literature . . . is at once richly satisfying and as elusive as a ghost. . . . Like all good writers, he reveals the sheer strangeness of much that our eyes usually slide over.”
— Literary Review

“Davidson enters the twilight zone, tracing the crepuscular in science, psychology, history, and the arts. Considering the 60th parallel north, around which ‘long evenings and protracted sunsets stretch,’ Davidson probes aspects of this transitional state, including visual perception during the stages of twilight (civil, nautical, and astronomical); dusk as a metaphor for crisis in Charles Dickens’s Bleak House; the proliferation of gilt and mirrors in the murky pre-electric era; and the poet Gerard Manley Hopkins’ observations of anti-crepuscular rays.”
— Nature

“And one wanted, since it’s not dark yet: a history of twilight—Davidson’s The Last of the Light.”
— Tim Dee

“For Christmas, I’d like Davidson’s The Last of the Light: About Twilight.”
— Alexander McCall Smith

“This is simply one of the best books I have ever read.”
— Clifford Cunningham

“These days, you’d expect an author just to google ‘twilight’ and pile up everything he finds. Not Davidson; this is a deep and personal meditation, and while some references, particularly to painters, might be obvious—Atkinson Grimshaw, Caspar David Friedrich, Whistler—most are not. . . . Davidson ranges right across the disciplines in his search for allusions, citing Ruskin, Rilke, Chopin, Kant, and Vanbrugh along the way. The result is revealing, poetic, and (unavoidably) illuminating. As a bonus, the book is beautifully and copiously illustrated.”
— Independent

"The Last of the Light is a cultural companion. . . . A cabinet of curiosities, paintings, poems, music framed by the idea of Europe as an archipelago of regret, many of whose most vital artifacts have dealt in echo and obscure longing, translated into a feeling for light. . . . It is a theme rather than a subject, and Davidson traces its variations in a blend of memoir, evocation of place, and cultural itinerary."
— Spectator

“The Last of the Light is as much a memoir as it is a more systematic attempt to catalogue the aesthetics of twilight since at least the Renaissance. . . . Davidson is a discriminating and perceptive guide to the myriad ways in which twilight, in its various forms and at different seasons, ‘silvers everything’; and he evokes the ‘other-worldliness’ of evening with a poet’s sensitivity. . . . Itis an impressively ecumenical survey of the poetics and aesthetics of twilight, which canonizes hundreds of writers. . . . Peter Davidson’s lyrical prose… dissolves the distinctions between memoir and criticism in a soft haze. His style is deliberately impressionistic.”
— Matthew Beaumont

“Davidson’s twilight writing comes across as something of a barometer for time of day, for twilight. His acute eye, registering tiny gradations of light and tone, shares common ground with the contemporary English environmental observers . . . Richard Mabey, Robert Macfarlane, Tim Dee—as well as with the ethos that informs Geoffrey Hill’s poetry. Davidson’s is a bravely unfashionable book, its cadences relentlessly slow. . . . Belatedness, as Davidson shows us, is the very essence of dusk, of the melancholy light of the fallen world.”
— Public Books

"This slim book was an endless revelation to me. It's a study of the many roles played in human art and society over the centuries by twilight, that strange, pessimistic stretch of time that's no longer day but not yet quite night. It's an easy subject about which to be trite or boring, and virtually every other book or essay I've read on the subject has been either trite or boring, but Davidson's book is eye-opening and wonderful, as lovely and gentle and strange as the daily phenomenon it describes."
— Open Letters Monthly

"Davidson's book is a primer on place and light. It recovers light itself as a phenomenon of place, and thereby complicates twilight's temporal and human dimensions, its seasons and densities. . . . In Davidson's measure of the twilight, a little light always remains."
— Rain Taxi Review of Books

"The Last of the Light surveys how artists and writers have employed dusk as they might a color or style to evoke nostalgia and melancholy. . . . I finished the book hoping that a brave museum might stage an exhibition on the arts of the evening."
— V&A Magazine

"Twilight—the subject of Davidson’s meditative and beautiful book The Last of the Light. . . . Davidson’s book offers us a series of intense, lyrical, and surprisingly moving meditations on landscapes, buildings, and mythical settings, as seen at the close of day through the eyes of painters and writers. . . . A spell bounding exploration of that haunted moment of transition, either on some particular evening or in the history of the civilizations through which Davidson effortlessly roams. . . . The poignant sense of the fugitive moment and the coming to an end of things haunts Davidson’s strange and magical book."
— Miranda Seymour