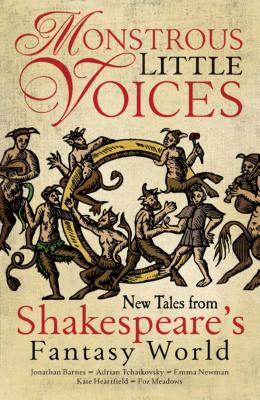 Mischief, Magic, Love and War. It is the Year of Our Lord 1601. The Tuscan War rages across the world, and every lord from Navarre to Illyria is embroiled in the fray. Cannon roar, pikemen clash, and witches stalk the night; even the fairy courts stand on the verge of chaos. Five stories come together at the end of the war: that of bold Miranda and sly Puck; of wise Pomona and her prisoner Vertumnus; of gentle Lucia and the shade of Prospero; of noble Don Pedro and powerful Helena; and of Anne, a glovemaker's wife. On these lovers and heroes the world itself may depend. These are the stories Shakespeare never told. Five of the most exciting names in genre fiction today - Jonathan Barnes, Adrian Tchaikovsky, Emma Newman, Foz Meadows and Kate Heartfield - delve into the world the poet created to weave together a story of courage, transformation and magic. Including an afterword by Dr. John Lavagnino, The London Shakespeare Centre, King's College London.

Jonathan Barnes's novels The Somnambulist and The Domino Men have between them been translated into eight languages. He writes regularly for the Times Literary Supplement and the Literary Review. Since 2011, he has been writer-in-residence at Kingston University. Kate Heartfield's fiction has appeared in places such as Strange Horizons, Crossed Genres, Podcastle and Daily Science Fiction. Her favourite undergraduate assignment, was to write an entire essay about Shakespeare's uses of a single word; her word was "mount." Foz Meadows is the author of two YA urban fantasy novels, Solace and Grief and The Key to Starveldt, and in 2014 was nominated for the Hugo Award for Best Fan Writer. They are also a contributing writer for The Huffington Post and Black Gate, and a contributing reviewer for Strange Horizons, A Dribble of Ink and Tor.com. Emma Newman's short story "A Woman's Place" won the British Fantasy Society Best Short Story Award, and her novels Between Two Thorns, After Atlas and Planetfall were shortlisted for the BFS Best Novel and Best Newcomer awards, the 2017 Arthur C. Clarke award, and the BSFA Best Novel award. Adrian Tchaikovsky is the author of the Shadows of the Apt series, Guns of the Dawn, Children of Time, Children of Ruin, the Echoes of the Fall series, Dogs of War, Redemption's Blade, Cage of Souls, the Tales of the Apt collections, The Bloody Deluge, Even in the Cannon's Mouth, Ironclads and Walking to Aldebaran. He has won the Arthur C Clarke and Robert Holdstock awards.