The Power Book: What is it, Who Has it, and Why? (Hardcover) 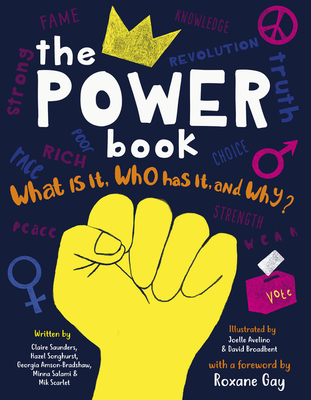 With this inspiring and brightly illustrated guide to power, learn about the different types of power, what it means to have power, and what you can do with your own power to create positive change in the world, no matter who or how old you are.

What makes you the boss of me? What makes a king a king, or a queen a queen? Why can some people vote for their leaders, but other people can’t? Does having lots of money make you powerful? Why are there fewer female scientists, leaders, and artists than men in history books?

These are things that kids wonder about. The Power Book answers these and other questions in a relatable way for young people, including thought-provoking discussions on challenging topics, like war, bullying, racism, sexism, and homophobia. You will gain an understanding of your place in your family, your school, and the world, and will discover ways in which you can use your own power to shape the future.

As you explore the many aspects of power, thinking points pose questions that spark self-reflection and quotes and stories from some of the greatest change-makers—such as Gandhi, Martin Luther King Jr., Emmeline Pankhurst, Rosa Parks, Malala Yousafzai, and Stephen Hawking—provide historical context and inspiration. Find more opportunities for learning at the back with a glossary of terms and suggestions for further reading.

Gain a greater understanding of how power works, then learn how to harness it for good with The Power Book.

Roxane Gay is an American writer, editor, professor and activist. She is the New York Times best-selling author of Bad Feminist, a collection of pioneering essays and memoir, Hunger. In April 2018, she was awarded a Guggenheim Fellowship for Creative Arts. She is a leading contributor to The Guardian and The New York Times and has been featured on This American Life and NPR. She has also worked in academia, teaching at Purdue and Yale. She is currently at work on film and television projects, and has launched her own radical book publishing imprint.

Born in Nebraska to Haitian parents who moved to the US when they were 19 years old, Gay's work deals with the analysis and deconstruction of feminist and racial issues through the lens of her personal experiences with race, gender identity, and sexuality. Her widely acclaimed writing has won multiple awards, and her voice continues to be one of the most important in contemporary conversations on race and gender.

Claire Saunders is a freelance writer and editor. A graduate of Cambridge University, she has been editing for over 20 years, and has worked on over two dozen titles for Ivy Kids. She has a son, 12, and a daughter, 10, and lives in Lewes in southern England.

Georgia Amson-Bradshaw is a writer and editor based in Brighton, UK.

Minna Salami is a Nigerian, Finnish and Swedish author, social critic and international keynote speaker. Her award-winning blog, MsAfropolitan, connects feminism with contemporary culture from an Africa-centred perspective. Her debut novel, Sensuous Knowledge, will be published by Zed and HarperCollins in 2020.

Mik Scarlet is a writer and broadcaster based in London, UK. He is an expert in the field of access and inclusion for disabled people.

Hazel Songhurst is an experienced writer and editor of non-fiction for children. Her interests span a wide range of topics and she enjoys creating books that stimulate and – in this case – empower young minds.

Joelle Avelino is London-based illustrator. She works with both traditional and digital methods of drawing and painting. She is greatly inspired by phenomenal women and her African heritage, particularly the bold, empowering history her motherlands hold. Having grown up in the UK she aims to bring these two worlds together through her work.