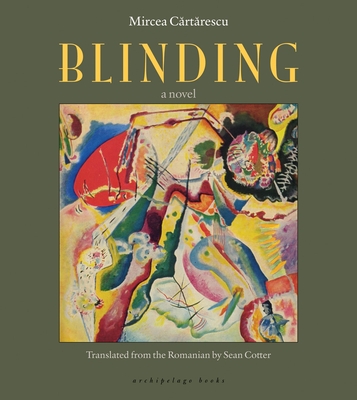 Part visceral dream-memoir, part fictive journey through a hallucinatory Bucharest, Mircea Cărtărescu’s Blinding was one of the most widely heralded literary sensations in contemporary Romania, and a bestseller from the day of its release. Riddled with hidden passageways, mesmerizing tapestries, and whispering butterflies, Blinding takes us on a mystical trip into the protagonist’s childhood, his memories of hospitalization as a teenager, the prehistory of his family, a traveling circus, Secret police, zombie armies, American fighter pilots, the underground jazz scene of New Orleans, and the installation of the communist regime. This kaleidoscopic world is both eerily familiar and profoundly new. Readers of Blinding will emerge from this strange pilgrimage shaken, and entirely transformed.

Mircea Cărtărescu (pron: Mer-chay-UH Car-tuh-RESS-cue) was born in 1956 in Bucharest, Romania. One of the foremost contemporary novelists and poets of Romania's 1970s "Blue Jeans Generation," his work was always strongly influenced by American writing in opposition to the official Communist ideology. Cărtărescu is the winner of the Romanian Writers' Union Prize, the Romanian Academy's Prize, and the 1992 nominee for the Prix Mèdicis, among other awards. Though his work has been translated widely throughout Europe, his work is rarely seen in English, until now. He currently lives and teaches in Bucharest, Romania.

"Blinding asks much from readers as it shifts between tender family history, Ceaușescu-era satire and visionary fantasies that recalls William S Burroughs. Stay with him: epiphanies and beauties abound in this deliriously ambitious work."
-- A Fiction in Translation Book of the Year, The Independent

"...a hot tip for the Nobel Prize in Literature this year.... Cartarescu demands much as he scrambles memory, satire, fantasy and near-mystical speculation, but amply rewards your commitment. [...] Above all, Blinding insists that memory can make a world. 'The past is everything, the future nothing.' From that past – which stretches back to encompass all of human history – Cartarescu has fashioned a novel of visionary intensity. Bring on the next instalment – soon."
-- Boyd Tonkin, The Independent

"As Borges said when Joyce’s Ulysses was published, this text does not aspire to be a novel, but a cathedral...A novel with a strong original voice, a unique flavor, and well-crafted poetic language, Blinding is a delight and a surprise, a major discovery of this year. This literary experience will bring new attention to Romanian literature, a cultural destination that for decades eluded North American audiences."
-- Los Angeles Review of Books

"...Cartarescu astounds without resorting to showiness, and the sheer energy and exuberance of his language is intoxicating. What’s more, his extra-sensory vision of Bucharest (and beyond) is mind-expanding."
-- Minneapolis Star Tribune

"Fluidly translated by Sean Cotter… the book has a cinematic quality that we don’t so much read as drift through—as in an amusement park ride. What fantastic notion, or iteration of metamorphosing insect will pop out and regale us next? If you’re game for a mystical mind-bend, give Blinding a go."
--The Los Angeles Review

"Nothing can prepare you for the scope and ambition of Blinding, the first volume of Romanian author Mircea Cărtărescu’s acclaimed trilogy. A phantasmagorical blend of fiction, memoir, surrealism, entomology, war, sex, death and destruction, the novel is, to use its own words, on a 'a continuum of reality-hallucination-dream."
-- Bookforum

"It is testament to translator Sean Cotter’s skill that this English version fairly vibrates with immediacy, its jungle-cat vigor apparent even during the book’s melancholy moods. Reading Blinding, the tears we feel on our face are unmistakably Cartarescu’s, and it is Cartarescu’s hand we feel tugging us down the twisting lanes between apartment towers, out to the far fringes of his personal past, whether remembered, reconstructed, or marvelously and eloquently re-imagined." -- Brooklyn Paper

"For English readers, the arrival of Blinding: Volume 1 is a great gift from the gods of altered reality. . . . It is tempting, when encountering a new translation, to compare the foreign author with someone more familiar ... those who reach into nightmares to capture the monsters in our waking lives. Still, Cărtărescu’s scope and ambition, soaring to metafiction and beyond,  surpasses most of these comparisons."
-- KGB Bar Lit Magazine

"Cartarescu’s first volume concludes with a spiritual call-to-arms, in which creativity and fertility are one and the same. This vision imparts beauty to this destiny, but there are also intimations throughout of power misused, of violence, of beings struggling for connection in the face of obstacles."
--Kristine Rabberman (The Quarterly Conversation)

"Cartarescu's themes are immense.... They reveal to us a secret Bucharest, folded into underground passages far from the imperious summons of history, which never stops calling to us."
--Le Monde (France)

"If George Lucas were a poet, this is how he would write."
-- New York Sun

"At once philosophical and historical, the novel is full of fresh insights and remarkable turns of phrase. Sean Cotter’s translation only adds to the book’s emotional tenor, since it reads like an English-language original, and it would not be too surprising to see this become an American bestseller as well."
-- Hannah Thurman, The Coffin Factory

"...like the Prague of Michal Ajvaz and the Buenos Aires of Borges, in Cărtărescu’s hand the rooms, gazes, corners, lamps, current events, political officials, ruins, hallways, and basements of Bucharest become portals to hidden, dreamlike, distorted, and yet visceral worlds. Reader, beware: one might veer into them at any second.... Cărtărescu’s prose, so magically transformed into English by Cotter, speaks to the reader with a lush and fruitful honesty. Time and again, he produces imagery you, the reader, are sure you’ve held in the quiet of your own subconscious, mirrored in Maria and Mircea’s own search for memories and images of their pasts."
-- Nathaniel Popkin, Cleaver Magazine

"The stakes of Cartarescu’s literary project are staggering. The novel seeks to answer the same question that all sacred texts seek to answer: what does it mean to be alive? What happens to us after we die? The book is as much a thought experiment as it is an aesthetic one... Sean Cotter has done a masterful, inspired job with the translation. The meditative, Baroque rhythms of Cărtărescu’s Romanian flow into graceful, vigorous English.... This fantastic, luminous work [...] has transformed Romanian literature into world and world-class literature."
-- Carla Baricz, Words Without Borders

"If Cărtărescu wants to see this chaos as conspiracy, then I will grant him this liberty. He has gained his right to it by the many spectacular stretches of prose that left me dry-mouthed and eyes gaping. . . Blinding clearly endeavors to construct a world—one bizarre and audacious enough to measure up with reality."
-- Scott Esposito, Kenyon Review

"There’s an audience that will devour [Blinding] whole, licking up every verbal crumb on its 460-plus pages. Fans of Gabriel Garcia Márquez who aren’t afraid to walk down the the shadier paths of the magical realist garden, perhaps? . . . Anyone who appreciates that all works of fiction are ultimately nothing more than dream palaces projected in print? Maybe you?"
--James Madison Books