Nerd: Adventures in Fandom from This Universe to the Multiverse (Hardcover) 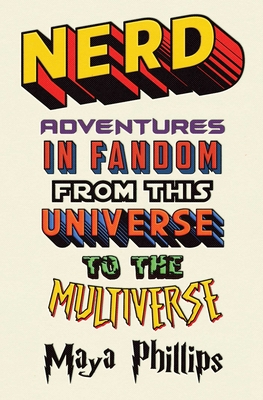 In the vein of You’re Never Weird on the Internet (Almost) and Black Nerd Problems, this witty, incisive essay collection from New York Times critic at large Maya Phillips explores race, religion, sexuality, and more through the lens of her favorite pop culture fandoms.

As a critic at large at The New York Times, Phillips has written extensively on theater, poetry, and the latest blockbusters—with her love of some of the most popular and nerdy fandoms informing her career. Now, she analyzes the mark these beloved intellectual properties leave on young and adult minds, and what they teach us about race, gender expression, religion, and more—especially as fandom becomes more and more mainstream.

Spanning from the 90s through to today, Nerd is a collection of cultural criticism essays through the lens of fandom for everyone from the casual Marvel movie watcher to the hardcore Star Wars expanded universe connoisseur. It’s for anyone who’s ever wondered where they fit into the narrative or if they can be seen as a hero—even of their own story.

Maya Phillips is a critic at large at The New York Times and the author of the poetry collection Erou. She received her BFA in writing, literature, and publishing with a concentration in poetry from Emerson College and her MFA in poetry from Warren Wilson’s MFA Program for Writers. Maya’s alter egos are Natsu Dragneel, the Eleventh Doctor, and Dustin Henderson from Stranger Things. She lives in Brooklyn. Visit MayaBPhillips.com and follow her on Twitter @MayaBPhillips.

“Maya Phillips has done the impossible: She has rescued fandom from the toxic grip of trolling dude-bros and reclaimed it for the rest of us, reminding readers why we become fans in the first place. A personal Pilgrim’s Progress of one nerd’s journey from Hoth to Mordor, Wakanda to Sunnydale, the Island of Long to a mystical land named ‘Manhattan’ (via a fluid prose that inspires its own swooning acolytes), Phillips’s superhero origin story shows us an alternate universe in which fantasy lit, comic books, and anime do not stunt one’s personal growth and adult perspectives—they enable them. It’s worth its weight in mecha suits.”
— David Fear, senior editor at Rolling Stone magazine

“From its very first pages, NERD is a delight. Equal parts autobiography and history of the way these genres and fandoms—and fandom itself—has grown, this collection of essays provides an impressive look at the larger cultural context in which these movies, TV shows, and comics exist. In the same way that the fandoms Phillips addresses often provide community and a sense of connection, the experience of reading NERD feels like making a new friend.”
— Karen Han, culture critic, screenwriter, and author of Bong Joon Ho: Dissident Cinema

“Like the heroes’ journeys that inspired her, Maya’s odyssey into fandom will resonate with anyone who ever camped out in the graphic novels section. Maya is a kindred spirit and Nerd a handy guide for fans of everything, everywhere.”
— Daniel Kibblesmith, author and Emmy-nominated TV writer

“With humor and exacting criticism, Phillips serves up food for thought—a whole meal, really—for anyone who’s ever struggled to see themselves as the hero.”
— BookPage (“2022 Preview: Most Anticipated Nonfiction”)