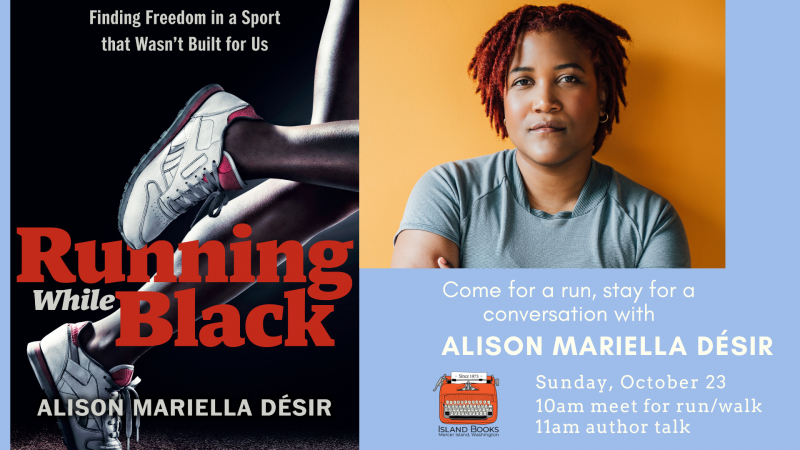 Come for a half hour run/walk at 10 am and then meet the author at 11am for conversation, snacks and giveaways!

Running saved Alison Mariella Désir’s life. At rock bottom and searching for meaning and structure, Désir started marathon training, finding that it vastly improved both her physical and mental health. Yet as she became involved in the community and learned its history, she realized that the sport was largely built with white people in mind. To help make running more inclusive and welcoming to people of color, Désir founded Harlem Run, an NYC-based running movement, and Run 4 All Women, which has raised over $150,000 for Planned Parenthood and $270,000 for Black Voters Matter.

Now she has written RUNNING WHILE BLACK: Finding Freedom in a Sport That Wasn’t Built for Us, a call to reimagine the industry. Balancing the benefits of running in her life against the realities of white supremacy in the sport and in America, Désir realized that the very existence of being a Black runner can hold the power to disrupt the white narrative while also carving out space for Black people. Tracing her own experiences within a larger discussion of race and athleticism in contemporary America, Desir offers a thought-provoking counter-history of the sport of running, showcasing its inherently problematic roots. From the original first recreational running boom in Oregon, to the unrecognized Black pioneers of the sport, to the horrific murder of Ahmaud Arbery, she shows how we got here—and where we still have to go. Bringing inequities to the light alongside her own story of transformation, Désir captures the infectious joy of movement while making an unflinching, inspiring call for change

Alison Mariella Désiris an endurance athlete, activist, and mental health advocate.  She  is currently co-chair of the Running Industry Diversity Coalition, a Run Happy Advocate for Brooks Running, and an Athlete Advisor for Oiselle.  Alison has been published in Outside Magazine, contributed the foreword for Running is My Therapy by Scott Douglas, and founded the Meaning Thru Movement Tour, a speaking series featuring mental health experts and fitness professionals. Running While Black is her first book.

Running While Black: Finding Freedom in a Sport That Wasn't Built for Us (Hardcover)