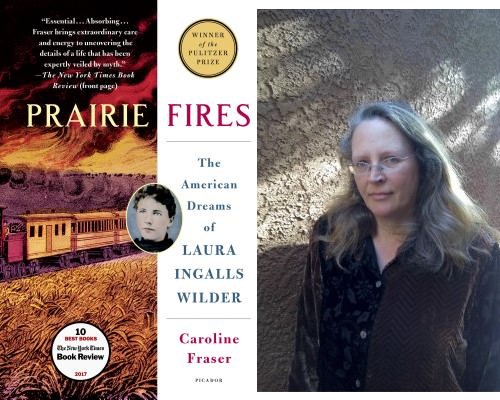 Caroline Fraser, author of the Pullitzer Prize winning Prairie Fires: The American Dreams of Laura Ingalls Wilder, will be in Mercer Island for the Pathfinder Awards. She will be joining us for a signing on April 30th at 6:30pm. Stop by, say hello to this Mercer Island native, and get a book signed!

The Pathfinder Award honors men and women who have contributed to society in meaningful ways through their service, leadership, and creativity in our communities. Graduates of Mercer Island High School have impacted the world in a variety of fields, including but not limited to the following areas: the arts and athletics; business; education; entertainment; law; medicine; the military; philanthropy and volunteerism; public service; religion; scholarship and science.

Millions of readers of Little House on the Prairie believe they know Laura Ingalls—the pioneer girl who survived blizzards and near-starvation on the Great Plains, and the woman who wrote the famous autobiographical books. But the true saga of her life has never been fully told. Now, drawing on unpublished manuscripts, letters, diaries, and land and financial records, Caroline Fraser—the editor of the Library of America edition of the Little House series—masterfully fills in the gaps in Wilder’s biography. Revealing the grown-up story behind the most influential childhood epic of pioneer life, she also chronicles Wilder's tumultuous relationship with her journalist daughter, Rose Wilder Lane, setting the record straight regarding charges of ghostwriting that have swirled around the books.

The Little House books, for all the hardships they describe, are paeans to the pioneer spirit, portraying it as triumphant against all odds. But Wilder’s real life was harder and grittier than that, a story of relentless struggle, rootlessness, and poverty. It was only in her sixties, after losing nearly everything in the Great Depression, that she turned to children’s books, recasting her hardscrabble childhood as a celebratory vision of homesteading—and achieving fame and fortune in the process, in one of the most astonishing rags-to-riches episodes in American letters.

Spanning nearly a century of epochal change, from the Indian Wars to the Dust Bowl, Wilder’s dramatic life provides a unique perspective on American history and our national mythology of self-reliance. With fresh insights and new discoveries, Prairie Fires reveals the complex woman whose classic stories grip us to this day.

Caroline Fraser is the editor of the Library of America edition of Laura Ingalls Wilder’s Little House books, and the author of Rewilding the World and God’s Perfect Child. Her writing has appeared in The New York Review of Books, The New Yorker, The Atlantic, the Los Angeles Times, and the London Review of Books, among other publications. She lives in New Mexico.