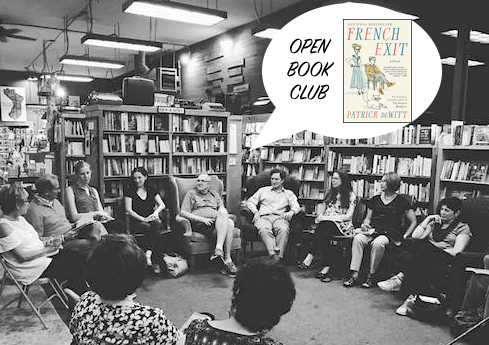 In December, our Open Book Club will read and discuss French Exit by Patrick deWitt. Note we will be meeting a week earlier than usual due to Christmas.

Frances Price – tart widow, possessive mother, and Upper East Side force of nature – is in dire straits, beset by scandal and impending bankruptcy. Her adult son Malcolm is no help, mired in a permanent state of arrested development. And then there’s the Price’s aging cat, Small Frank, who Frances believes houses the spirit of her late husband, an infamously immoral litigator and world-class cad whose gruesome tabloid death rendered Frances and Malcolm social outcasts.

Putting penury and pariahdom behind them, the family decides to cut their losses and head for the exit. One ocean voyage later, the curious trio land in their beloved Paris, the City of Light serving as a backdrop, not for love or romance, but self-destruction and economic ruin – to riotous effect. A number of singular characters serve to round out the cast: a bashful private investigator, an aimless psychic proposing a seance, and a doctor who makes house calls with his wine merchant in tow, to name a few.

Brimming with pathos, French Exit is a one-of-a-kind 'tragedy of manners,' a send-up of high society, as well as a moving mother/son caper.

Island Books' open book club meets either the second-to-last or last Thursday of every month at 7:30pm. Our staff facilitator chooses both fiction and nonfiction titles. All are welcome to attend, and if you purchase your book here in the store you'll always get a 10% discount.