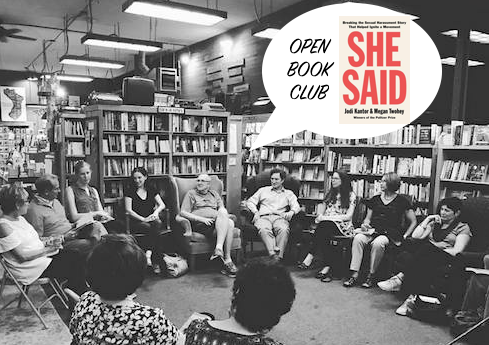 In February, our Open Book Club will read and discuss She Said by Jodi Kantor and Meghan Twohey.

For many years, reporters had tried to get to the truth about Harvey Weinstein’s treatment of women. Rumors of wrongdoing had long circulated. But in 2017, when Jodi Kantor and Megan Twohey began their investigation into the prominent Hollywood producer for the New York Times, his name was still synonymous with power. During months of confidential interviews with top actresses, former Weinstein employees, and other sources, many disturbing and long-buried allegations were unearthed, and a web of onerous secret payouts and nondisclosure agreements was revealed. When Kantor and Twohey were finally able to convince some sources to go on the record, a dramatic final showdown between Weinstein and the New York Times was set in motion.

In the tradition of great investigative journalism, She Said tells a thrilling story about the power of truth, with shocking new information from hidden sources. Kantor and Twohey describe not only the consequences of their reporting for the #MeToo movement, but the inspiring and affecting journeys of the women who spoke up—for the sake of other women, for future generations, and for themselves.

Island Books' open book club meets the last Thursday of every month at 7:30pm. Our staff facilitator chooses both fiction and nonfiction titles. All are welcome to attend, and if you purchase your book here in the store you'll always get a 10% discount.

She Said: Breaking the Sexual Harassment Story That Helped Ignite a Movement (Hardcover)