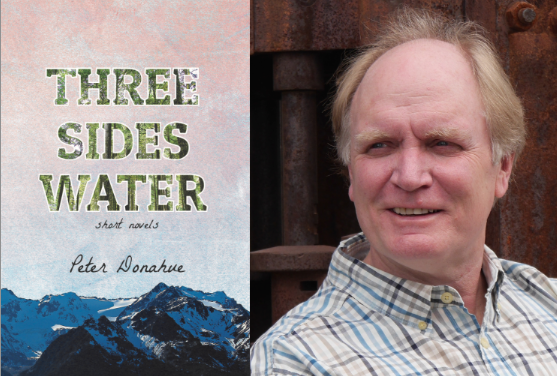 Island Books is delighted to welcome Peter Donahue, who over the course of a long career has produced an inimitable fictional chronicle of our Northwest region. His books include the award-winning novels Madison House and Clara & Merritt, and (as editor) the acclaimed anthology Reading Seattle: The City in Prose. His latest work is Three Sides Water, portraying the lives of three young people who seek meaning in an often violent, insensible world.

Across the dramatic landscape of the Pacific Northwest’s Olympic Peninsula, Donahue’s characters take extraordinary actions to transcend the limitations imposed upon them. Marguerite struggles with the emotional aftermath of sexual assault amid the mysticism and untamed wilderness of the Pacific coast in the 1920s. Avery navigates life as a “juvenile delinquent” while the social and political convulsions of the 1960s transform the world around him. Chris escapes the present-day mill town where he grew up, only to find he must reconcile his true self with the troubling persona he's taken on.

In his newest work of literary fiction, Donahue distills the raw and vivid world of the Olympic Peninsula into a stunning work that challenges what it means—in three distinct eras—to live life with purpose and integrity.

"Peter Donahue has produced a rare animal: three stories that flourish as separate novels and also succeed as a single book. He deftly details a brooding, primitive coastline, a juvenile detention center, and the modern I-5 corridor. In these landscapes are genuine souls—strange, hopeful, sometimes tragic—rendered with a remarkable honesty and care, who struggle for nobility in thoroughly compelling narratives." —Bruce Holbert, author of Washington State Book Award winner The Hour of Lead