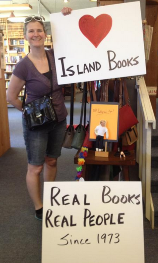 The first-ever Independent Bookstore Day has come and gone, and all we can say is "whew." What a whirlwind.

The day dawned with customers already at the door, several there to pick up their IBD passports and set off on a quest. If they got those passports stamped by at least three participating stores, they were entered in a drawing for various prizes, including signed first editions; if they made it to all 17 on the list they earned a 25% discount good for a year at every shop. We were caught a little by surprise to see how many people had dedicated themselves to accomplishing the feat, and very pleased that most every one of them was out for more than just a stamp. They lingered to browse and to take part in the festivities.

Those festivities included dozens of spins of the big wheel--everyone who made a purchase of $50 or more won a prize, perhaps a custom tote bag, a DVD, or a gift certificate worth as much as their purchase. We also sent customers on a scavenger hunt to seek out a dozen historic artifacts scattered through the store. Dedicated scavengers took home advance copies of forthcoming books, getting a sneak peek of what their neighbors will be reading in the coming months. We also sold many special items that were (and are--we still have a very few remaining) available only from indie stores. Signed prints from noted illustrators are now gracing the walls of children's rooms across the island, and literary tea towels can be found in their parents' kitchens.

Probably the biggest hit of the day was the opportunity to beat the boss at his own game. Roger took on all comers at the gift wrapping table, and if we may say so, he was en fuego, acting both as master of ceremonies and center stage performer. You can catch a glimpse for yourself below.

Plenty of other video was shot and plenty of pictures taken, many shared widely on social media with the #SEABookstoreDay hashtag. Often technology gets in the way of real human interaction, but in this case it helped bring people together, and we're very glad it did. We loved seeing all the new visitors to our island, and we especially loved seeing all the old familiar faces who stopped in to help us celebrate.

Here's to doing it all again next year! 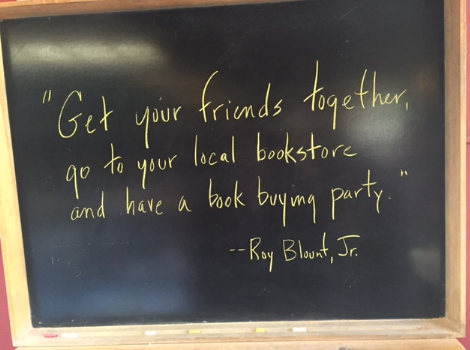