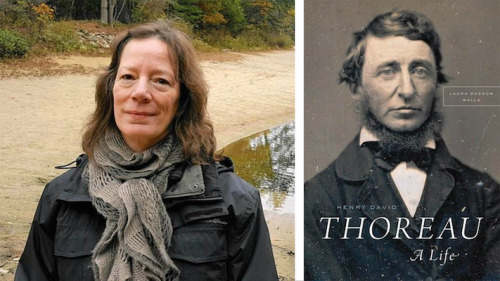 For many reasons, I’ve always considered Island Books to be a quintessentially Thoreauvian spot. In part it’s the old cedar shelves that make me think so and in part it’s because this is a place where you can use an adjective like Thoreauvian without getting funny looks. You can march through our doors to the beat of a different drummer and find something to read that will encourage you to live deliberately and front only the essential facts of life. You can enjoy hours of solitary contemplation here as Henry David Thoreau did in the woods, and you can also socialize as he did in his hometown:

Every day or two I strolled to the village to hear some of the gossip which is incessantly going on there, circulating either from mouth to mouth, or from newspaper to newspaper, and which, taken in homeopathic doses, was really as refreshing in its way as the rustle of leaves and the peeping of frogs.

Maybe that should be our new slogan—”Island Books: As Refreshing as the Rustle of Leaves and the Peeping of Frogs.” Or maybe not.

Updated catchphrase or no, when I saw last summer that a definitive new biography of Henry David Thoreau had been published by the University of Chicago Press, I knew we needed to stock it. After it arrived and I opened it up, I knew instantly I wanted to read it. “Everyone who comes to Thoreau has a story,” the preface begins. “Mine begins in a neighborhood bookstore where I pulled a book off the shelf simply because it was small and green …” The reviewers loved it, too. It was a New York Times Notable Book for 2017 and the Wall Street Journal named it one of the ten best books of the year.

Months later, we were visited by an Alaskan couple who’d made a special trip to Mercer Island during their annual vacation in the Seattle area. They asked if we had the book. Of course we did. They asked if we knew the book. Of course we did. They asked if we’d read the acknowledgments in the back. Of course we … say again? And there on the final pages we read about the “very long journey” that led Laura Dassow Walls to write her biography, one that began on the day she “walked into Island Books, on Mercer Island, Washington, and found Walden on its shelves.” It was a great honor to discover that our Thoreau connection is solid and we really can call ourselves Walden Pond West ... continued